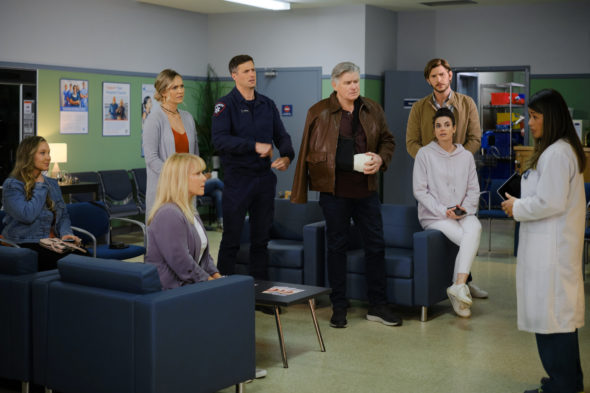 The O’Brien family’s story comes to an end in the sixth season of the Chesapeake Shores TV show on Hallmark Channel. As we all know, the Nielsen ratings typically play a big role in determining whether a TV show like Chesapeake Shores is cancelled or renewed for season seven (in this case, we know it’s ending). Unfortunately, most of us do not live in Nielsen households. Because many viewers feel frustrated when their viewing habits and opinions aren’t considered, we invite you to rate all of the sixth season episodes of Chesapeake Shores here.

A Hallmark Channel family drama, the Chesapeake Shores TV series stars Robert Buckley, Meghan Ory, Treat Williams, Laci J. Mailey, Emilie Ullerup, Brendan Penny, and Andrew Francis. The store explores the lives of the O’Brien family, after the homecoming of eldest daughter Abby O’Brien (Ory), a high-powered career woman and divorced mother of two. In season six, the O’Brien family comes together in the aftermath of Connor’s (Francis) heart attack. Jess (Maily) and David (Carlo Marks) start to deal with the media fallout after Dennis Peck (Malcolm Stewart) goes on the run, and lean on one another for support. Abby finally reveals to her family who she called at the end of season five and this leads to an unexpected yet exciting first date. Meanwhile, Mandrake (Wesley Salter) and Kevin (Penny) talk about their difficult past.